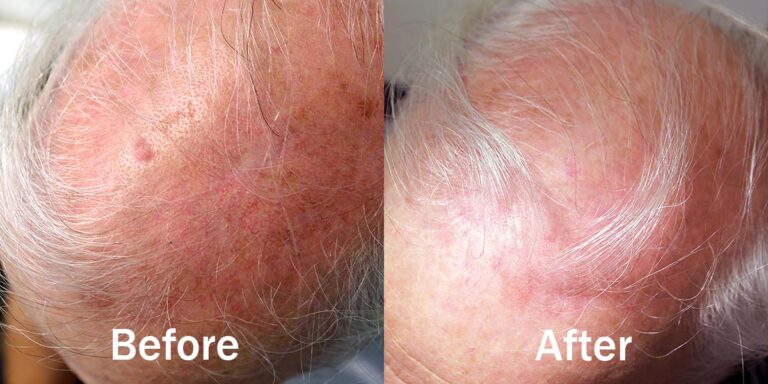 What is actinic keratosis?

Actinic keratosis (AK) is a common precancerous lesion that forms on skin damaged by the sun’s ultraviolet rays. While anyone can develop actinic keratosis it generally affects people over the age of 40 or people with a history of a lot of sun exposure or sunburns. It presents as a rough, scaly patch and is often found on sun-exposed areas of the body, such as the shoulders, back, face, lips, and ears. An estimated 5-10% of AKs turn into skin cancer.

Treatment for AKs relieves symptoms, such as tenderness and itching. Importantly, treatment prevents AKs from progressing to skin cancer. While there are different treatment options, cryotherapy is the most common.

Traditionally, cryotherapy utilizes liquid nitrogen, which requires a substantial capital investment for providers. For convenience, low cost and efficacy of treatment, many providers are now choosing alternative cryosurgery devices. Hydrozid® is one such device.

Hydrozid® comes with a patented delivery system, contained in the spray head. The spray head was developed to ensure that a consistent, controlled spray is delivered every time. Hydrozid® contains the gas norflurane (R134a), which has been used in asthma inhalers for many years and is proven to be safe. Hydrozid® was developed by a family-owned pharmaceutical and medical device company in Denmark. It has been used successfully throughout Europe since 2013.

When applied to the skin surface, Hydrozid® generates temperatures between -58°F (-50°C) and -65.2°F (-54°C). This is well below the temperatures that result in cell death. The formation of intra- and extracellular ice crystals destroys the top layer of skin – without damaging the healthy tissue. Effective treatment is achieved through repeated freeze-thaw cycles. The procedure is very brief, effective, and patient friendly. 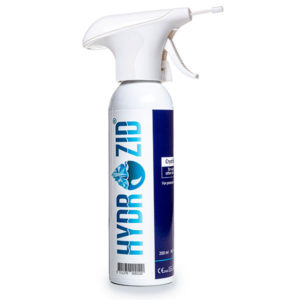 Hydrozid® is applied on the lesion from a distance of 2-3 centimeters. If the lesion covers a sizable area, circulating the stream within the specific area is advised in order to achieve even treatment of the whole lesion. For the treatment of minor lesions, use of the application template is recommended to protect the surrounding healthy tissue. Templates are included with Hydrozid® canister. The trigger should be squeezed gently to obtain a light, constant stream. The treated area turns white when ice crystals are formed. Allow to thaw for the recommended time and repeat the freeze-thaw cycle if needed. 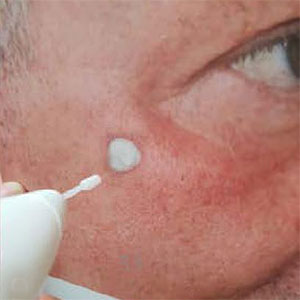 The treatment time varies from one patient to another and depends partly on the location, thickness and appearance of the lesion as well as the patient’s skin type, age and other individual considerations. We always recommend making your own assessment on how to treat the specific lesion and only regard the treatment times as general guidelines.

The product guidelines recommend an approximate total freeze time of 8 to 10 seconds, with freeze thaw cycles from 2×4 to 2×5 seconds.

See the Instructions for Use (IFU) for details on indications, contraindications, warnings, and cautions.

Patients should be informed that after treatment the area may be sore and in some cases swollen and dark in color. Tenderness will typically disappear within the first 24 hours after treatment. Use of makeup is not recommended until the treated area is completely healed. Patients should be told that a scab will form over the treated area, which is part of the healing process. The scab should not be scratched or touched. The treated area will in most cases be lighter than the rest of the skin; this will decrease over time.

If the treated area becomes dry, a fragrance-free moisturizer may be applied after washing the area with a mild fragrance-free soap. The use of creams containing glycolic acid or Vitamin C, and scrubs and tretinoin should be avoided for 7-10 days after treatment. Generally, we recommend the patient see their provider for follow-up 3 weeks after treatment to assess the healing and determine if additional treatment is needed.

A patient’s actinic keratosis is seen on patient’s head.

After 3 weeks, the patient’s actinic keratosis is no longer visible. The results vary from patient to patient and are also dependent on subsequent care of the treated area and avoidance of sun exposure.